Wonga Finance SA (Pty) Ltd commissioned research into the extent and characteristics of informal lending in South Africa in 2017.

The research, conducted by research and analytics consultancy Eighty20, focussed on mashonisas, a term often translated as “loan sharks”, and their activities, which are common in townships and informal settlements around the country. 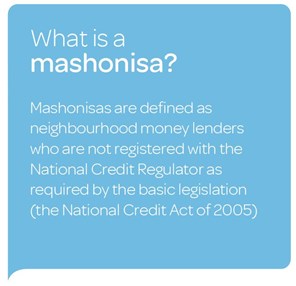 The research was prompted by a contraction in the consumer credit market in South Africa, especially the short-term unsecured category, in recent years. This has happened approximately in parallel with the implementation of tighter lending criteria following amendments to the National Credit Act in 2015.

The purpose of the research was to explore what happens to consumers who are not able to access credit from formal providers and the possibility of a link between more restrictive regulation and a growth in informality.

Mashonisas are illegal and unregulated which means their operating models are not impacted on by regulations and they incur no compliance costs in terms of the National Credit Act. The research highlighted that informal lenders meet a fairly specific need that is, in general, not well catered for by formal lenders. In some cases, it is entirely plausible that consumers who are unable to access credit in the formal sector would access informal sources of credit.

The study also revealed a series of surprising insights which lay the foundation for a new understanding of the informal credit market, differing somewhat from conventional wisdom. It suggests that mashonisas are a far more widespread phenomenon than is often thought. Based on a physical count conducted in the streets of Enkanini, an informal settlement outside Khayelitsha, researchers conservatively estimated that there could be at least 40 000 mashonisas operating in South Africa. In fact, the qualitative evidence collected suggest this is likely to be a low estimate. The interviews with mashonisas and the focus groups conducted with their customers demonstrated that the mashonisa market is separate from but complimentary to the formal market. Mashonisas offer quick and easy access to small, short-term (less than one month) cash loans that are utilised by borrowers to manage their monthly cash flows. They are typically used to finance immediate needs such as food, transport, cell phone airtime and pre-paid electricity, and less commonly used to finance unexpected once-off expenses such as funerals. The research suggests that informal credit is not always a substitute for formal credit and indeed that consumers access both at the same time, for different purposes.